In case of a short circuit in a specific segment of the electric network, uncontrolled current flows into the short. This is the fault current or the short circuit current. Fault currents are likely to be many folds higher than the nominal current and may cause severe damage to devices in the electric grid. Since the power is proportional to the square of the current, the extra power generated by the fault currents leads to over heating and sometimes to device burnout. In addition, mechanical forces, which also increase as the square of the current, become significantly higher during a fault event and may result in device tear-off and even in device explosion. 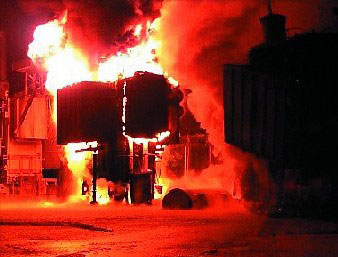 Present solutions to the fault current problem include circuit breakers, which are capable of disconnecting the fault current. Also, devices in the grid (transformers, for example) are built to exhibit high impedance, which limits the fault current. Reactors are also used in some locations to insert additional impedance to the grid, and the network is segmented to reduce fault currents. However, The above solutions exhibit several drawbacks:

The discovery of High-Temperature Superconductors (HTS), which enables operating at liquid Nitrogen temperatures, has opened a new window for using HTS for the purpose of fault current limiting. Worldwide effort has begun, aiming at developing fault current limiters based on HTS materials. This R&D effort has focused on two main channels:

Resistive FCL: The most intuitive solution is to add a superconductor in series with the grid (see the sketch to the left. Credit: accessscience.com). The superconducting element is designed to remain such during normal grid operation, where a nominal current flows through it, and switch to its normal state when the fault current rises and exceeds the critical current of the HTS element. It's the normal state resistance that then limits the current from reaching its prospective value.

Despite the partial success of the resistive type fault current limiter, some of its drawbacks became evident: clearly, as the HTS elements present finite resistance in AC current mode of operation, it is subjected to losses, which require increasing cooling power as the rating of the FCL increases. In addition, the dynamic nature of the transition from superconducting to resistive state and vice versa and the high energy dissipation during the transition makes the recovery of the resistive FCL slow and require a parallel inductive shunt to deflect the high current and allow switching of the HTS element.

The inductive type FCL is based on a transition between low and high impedance states of the device, which is primarily an inductor. The traditional concept uses a magnetic core screened by a cryogenically cooled HTS element. A primary coil, connected in series with the grid, is wrapped around the HTS screen (see the sketch to the left. Credit: accessscience.com).